Since I have skipped a few weeks in documenting my fitness, let it just be said that i’ve gone every workday at lunch and then after work minus one day that I worked from home and two days that I was working on my sketchbook.

I’ve continued taking the evil class, power sculpt and core and last week, I successfully did a real sit up. I previously could only do crunches, my abs/back just couldn’t pull my entire body up. I’ve noticed that my ability to actually do sit ups is spotty, a few days ago I lost the ability to be able to do them halfway through a class, but then could do them again after?

Kickboxing and zumba remain my favorite classes for right now, although zumba is really too early for me to swing very often. They just released a new group class schedule, so maybe i’ll have some more favorite classes soon.

The free month i won at the gym expired at the end of January and I decided to actually join. It was a pretty easy decision due to the sauna and steam room <3 The group classes at lunch are pretty awesome, and finishing up the day with some “running” on machines and then some sauna is pretty sweet. For those wondering, I am almost at Crickhollow on my trek to Mordor :)

One of the things we get as a part of membership is a free personal training session to assess where you are and where you want to be and to give you a plan on action. I’ve been debating what I want my goal to be. I’ve pretty much given up on weight loss, for reasons I’ll delve into in a minute. My only real fitness related goal I’ve ever had is to be able to do a single pull up, but that’s a seriously weak goal.

And I’d like to point out that this is me NOW after having lost a ton of weight and going to the gym (off and on), various fitness related classes, and biking/walking whenever I can for a few years. As sad as my current level of stamina might be, it’s infinitely better than it previously was. Even though I’m significantly fatter than I was as a teenager, I’m in a hell of a lot better shape.

While I’m on depressing topics, I have managed to GAIN two pounds during the month I’ve been going to the gym. At the behest of my friends I took measurements (as everyone assumed I was gaining muscle and thus gaining weight while slimming down), alas i have also gained an inch in my waist (nothing else budged).

I can only hope that I’m just retaining water or something. I’m working pretty hard at the gym and not eating significantly differently than I have been. I haven’t gained any weight in about 6 months due to my thyroid medicine finally getting sorted out. When I weigh myself again next weekend, if it’s not better i’m pushing up my appointment with the endocrinologist. There’s no reason that I should be gaining weight right now, unless the extra physical exertion is screwing up my thyroid levels somehow, which isn’t something I’ve heard of.

I finally made it to Heels on Wheels again! I had missed a few months due to general frantic gestures to get things done and traveling. I was even the “cover girl” this month on Cameron (the photographer who comes out)’s blog. 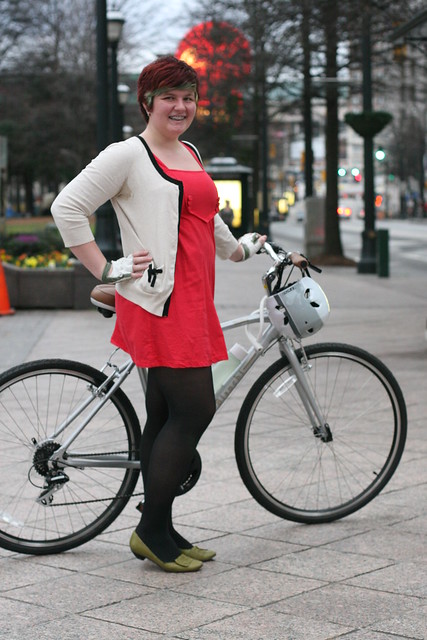 There was a "wear red for Valentine's day" theme. Also, that's my new bike :) More pictures await behind this one.

I also started back at ballet. This may or may not have anything to do with the fact that I finally watched Black Swan a few weeks ago. I dropped down to the Intro class because the center work in the Beginner class was a bit much for me due to my general lack of coordination and inability to tell my right from left. However, the Intro class is too easy (as I took ballet forever as a child and have a pretty strong foundation). I’m planning on taking 1-2 more Intro classes to build up my confidence and then going back to Beginner.

Still working on getting Tim to commit to Swing/Lindy classes. My lack of coordination does not hinder my love of dancing… it just makes me never want to do it in public. Maybe just taking a ton of dance classes is my ticket out of awkward times at weddings?